Debbie and Tyson. “I spend most of my time in this room, I really like the yellow parts of the kitchen.”

They mosaic splash back, created by Debbie, is one of the earliest mosaics in the home. “I was very inspired by Le Maison Picassiette in France. I don’t think it took very long to do, perhaps a week at the most.” 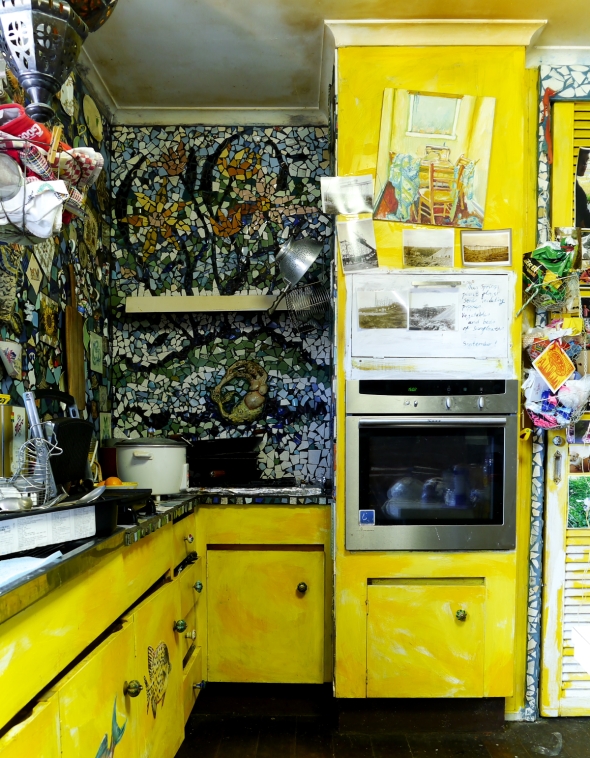 Debbie has been interested in art from a young age,  having been surrounded by creatives her whole life. ” My father was a plein air oil painter when I was growing up, and I went painting with him. Now he paints watercolours. I also had an aunt Ena who lived in a house full of paintings, who would always gave people tours of them. There were painters in her family for several generations. She gave me the idea that art was important.” 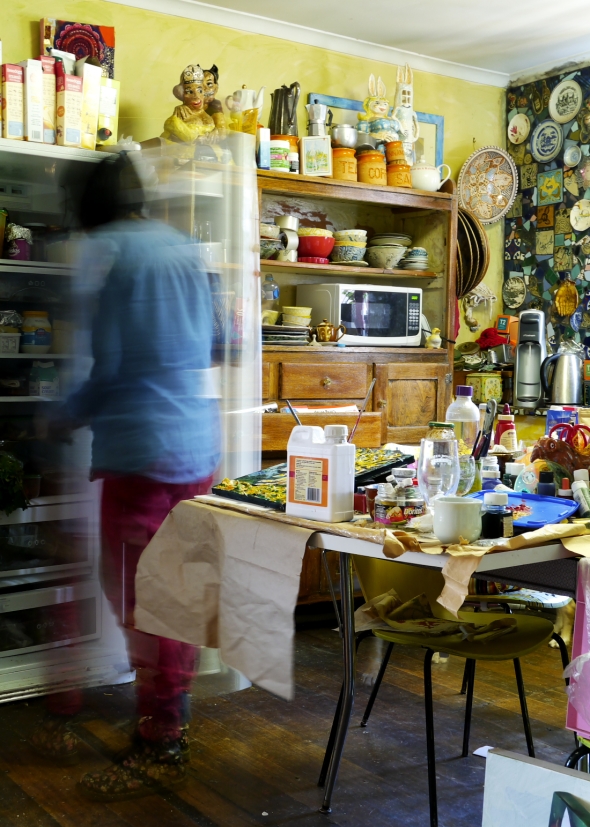 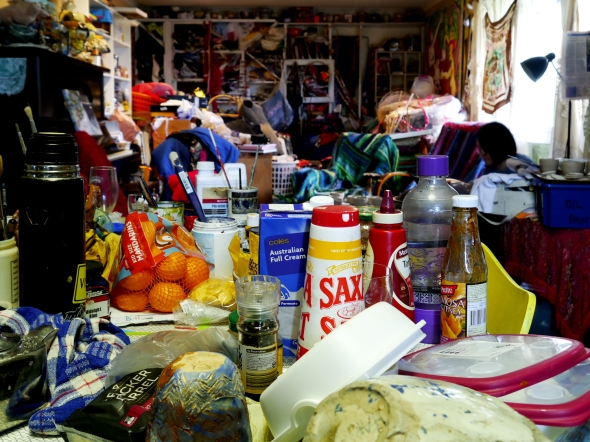 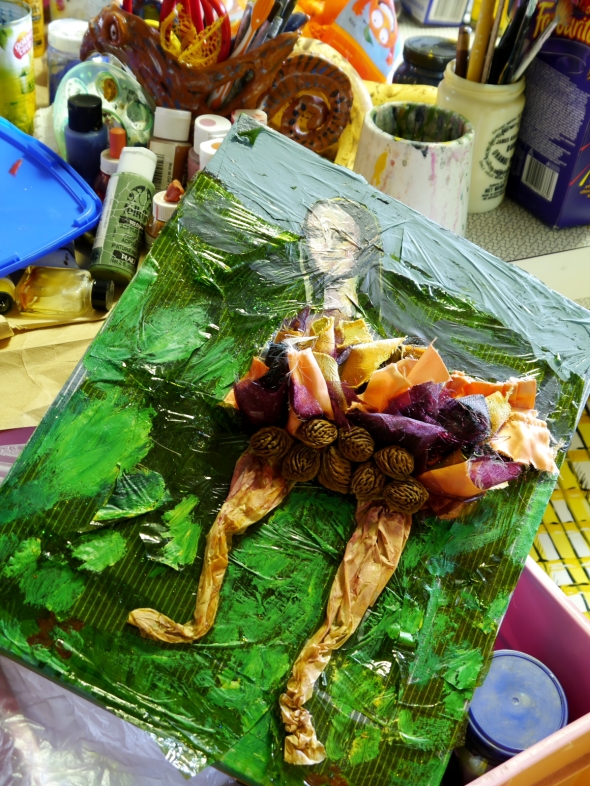 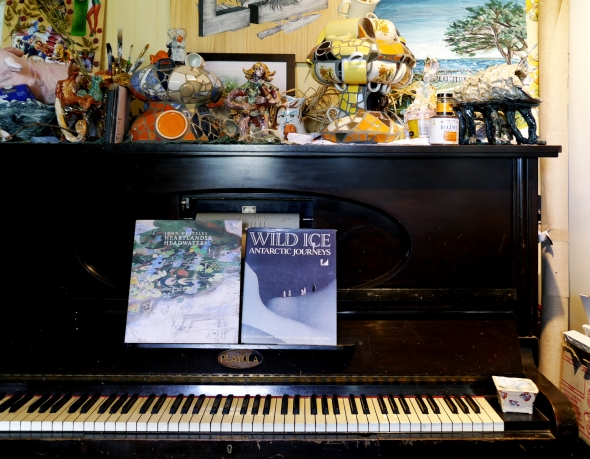 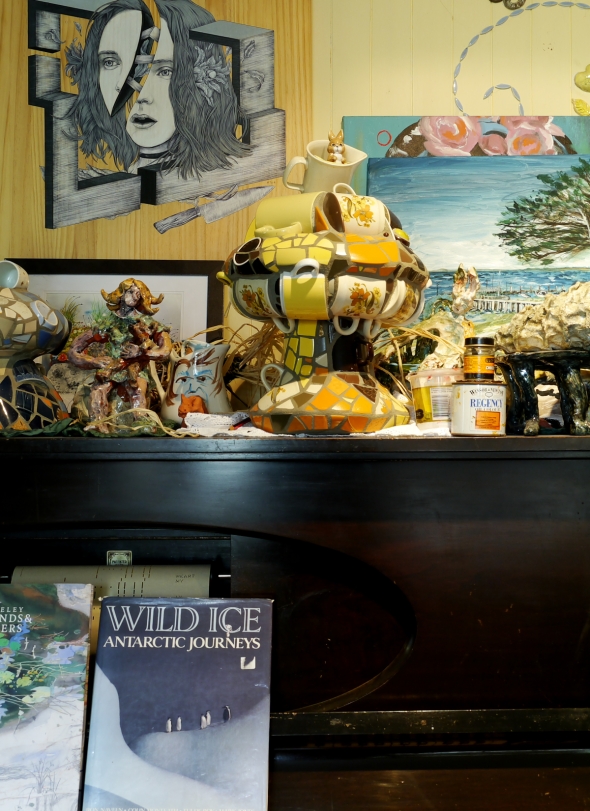 Artwork of woman’s face on left – Mitch Hickey.Mosaic sculpture by by Sanne Malkaer.

“These cups I am making are for a project I’m doing called ‘Message in a Cup’. I’m going to make 100 of them and they will have people’s messages about learning on them and be put into Footscray for people to find as part of BluScray. Apart from that, I’m addicted to making cups. There are perhaps at least 200 hand made cups in the house.” 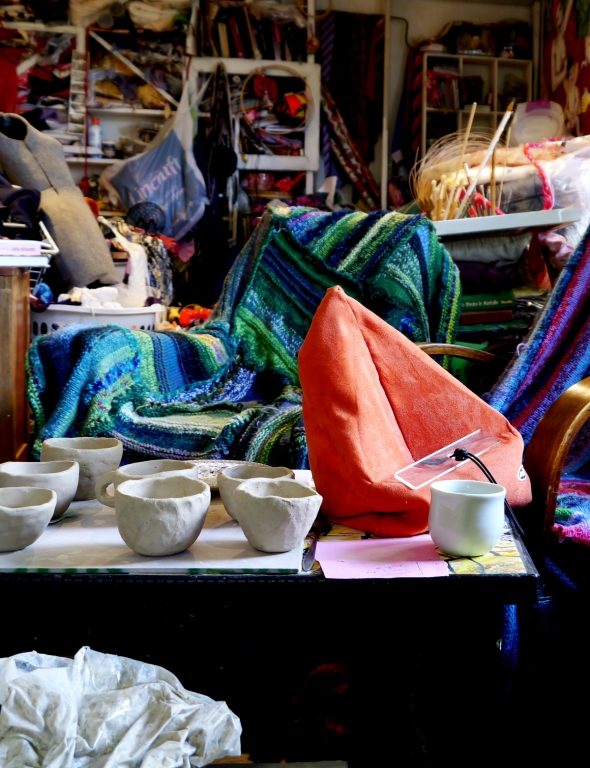 1. What’s the room and who uses it?
Kitchen/lounge/studio
I am the main user of the room. The children mainly use it when they’re hungry.

2. What do you do (or did you do) for a crust?
Artist (mainly work in schools on projects).

3. What goes on in the room?
Cooking, eating, watching ABC iview, reading, music (composed by daughter on pianola), entertaining friends in armchairs, painting, art projects on kitchen table and sewing in the studio end.

4. Favourite piece in the room and why?
Too difficult to choose, perhaps I will think about it…

5. Anything on your wish list that you would love to add to the space?
More space so I could fit in more armchairs.

7. Why do you love this room?
I spend most of my time in this room and I really like the yellow parts of the kitchen.

8. What’s one lovely memory you have whilst being in the room?
When my daughter had her eighteenth birthday, the speeches began to go for too long so we let off champagne into the crowd of teenagers. The teenagers responded by having a food fight and the champagne dripped from the ceiling onto everybody…I guess it is the room of birthday cakes and gatherings.